Surfing into the Future at the AUC 65th Employment Fair 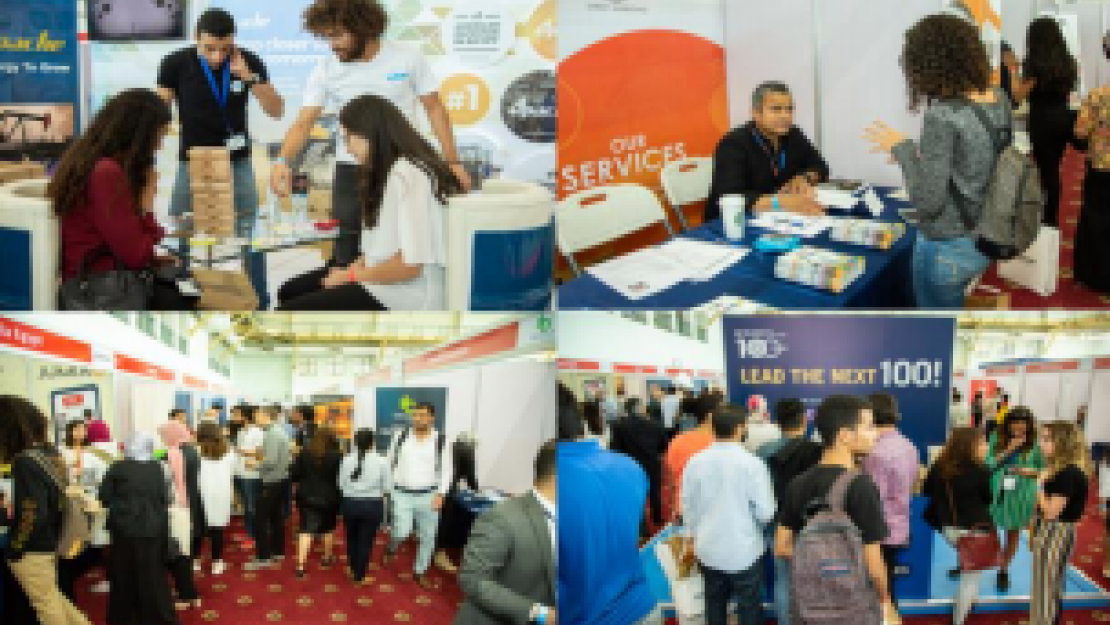 The first Employment Fair of this academic year was held on November 2, 2019, marking it as the 65th successful large-scale event to be held by the AUC Career Center. Boasting an attendee count of 1702, the fair managed to attract a large number of AUCians from different majors and class standings who got to closely interact with numerous prestigious regional and global corporates and organizations.

Francis Ricciardone, AUC President, started off the event by emphasizing the importance of career development centers in bridging the gap between higher education and what corporations are looking for in their prospective employees. He also mentioned ‘the world of tomorrow is unpredictable and that these centers help students get  prepared for that world along with the “inquiry-based, experiential, hands-on, liberal arts education that AUC offers  across the disciplines.” President Ricciardone’s speech was succeeded by Maha Guindi, Executive Director of the  Career Center, who announced “AUC Career Center will be holding its first Inaugural Regional Career Conference on  December, 7 & 8. Poised to be a promising platform to discuss the future of the workforce, the conference will host  university career professionals, Talent Acquisition professionals, and prominent speakers from all around the world.”

Many familiar corporations came back to participate in this fair, knowing that the AUC talent pool still has much to offer and believe in the power of employment fairs. Lidiya Adel, Talent Acquisition and Organizational Development  Manager at Lilly said “the company regularly posts job updates on the AUC CareerWEB in order to keep interested applicants informed about new opportunities”. She was happy that attendees were enthusiastic about the future and were glad to see graduates from different class years present, highlighting that the company appreciates and accepts applications from all AUC alumni who majored in relevant areas. There were also some new entries into this fair, most notably, Amazon who has only been in the Egyptian market for two years at most. The company was gracefully welcomed by numerous interested attendees who wanted to know more about what opportunities it offered. Mohamed  Ragab, Area Manager at Amazon’s Fulfillment Center in Cairo, mentioned “the company’s local branch is still young and has a lot of vacancies to be filled with high caliber fresh students. E-commerce in general is growing at triple digits,  so we’re more than doubling each year, so we’re hiring a lot of people.” Being an AUC alumnus himself, he was happy that he got to experience both sides of the employment fair and reflected that he was sought after by big corporations because of the strong reputation that the university holds in terms of academic excellence and quality.

Several AUC students attended the fair this semester and were eager to find work opportunities so that they could formally enter the corporate world. Ahmed Abo ElSaud, a graduating Finance senior, came to the event in order to prepare for his work life after graduating. He added, “I like the variety of the companies that are present and urge  younger students to go for Work-Study opportunities that the university offers so that they could develop professional  skills from early on.” Yumna Moussa, a Physics fresh graduate, has been coming to each fair for the past five years including this one because of her firm belief in the fair’s importance and the fact that she was able to get two internships opportunities from previous fairs. She is excited to see how the Egyptian market changes over the years as evidenced by the diverse companies that participate in the university’s events.

Yet again, the Career Center's Employment Fair was able to bring students one step closer to the future that they envision for themselves. It was able to guide them to the right people to answer their questions and cast away their doubts.