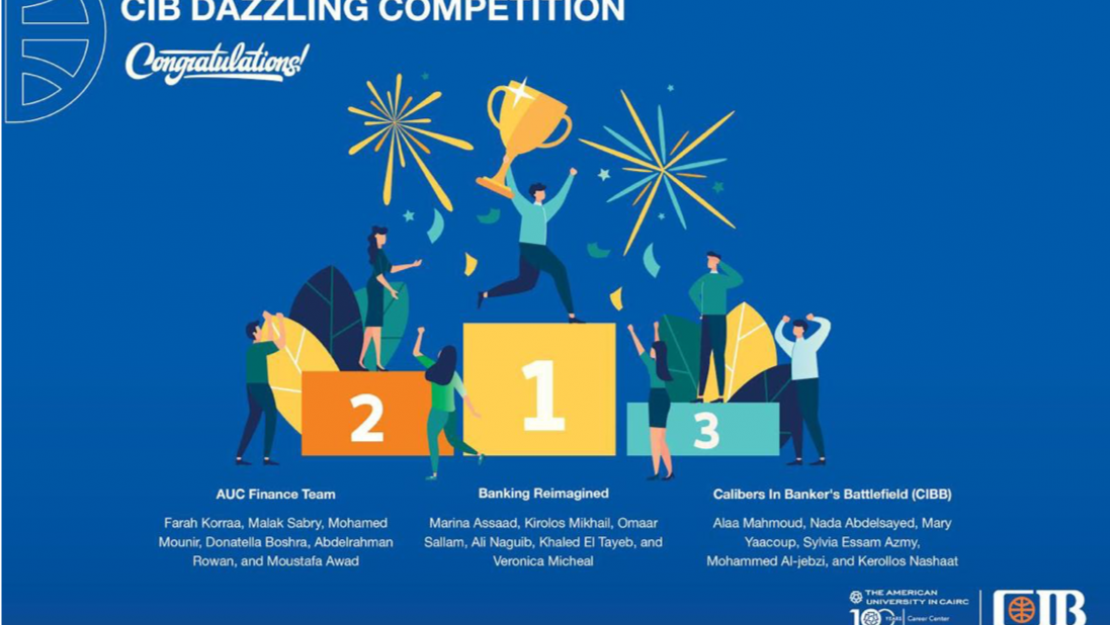 With everyone having to adapt to the new current reality, the corporate world has had to think up new creative ways to grow stronger despite the pandemic restrictions. One such example is the Commercial International Bank (CIB) of Egypt which decided to reach out to interested students, with the AUC Career Center and AUC Business Association, for fresh ideas regarding the future of the banking industry.

Tied with that dedicated approach, the first virtual CIB dazzling competition was a successful prove. Dazzling competition whereby team teams would go beyond their academic background and propose possible solutions that could innovate the banking experience. There were 36 students teamed up in six groups. The teams got to present their ideas online in front of a judging committee, including two panelists from AUC, professor of practice Angus Blair.

Mohamed Hamza, AUC Vlab associate director and two from CIB, Nermin Essam - CIB training manager, L&D and Ahmed El Shafei - CIB deputy head consumer segments and products. The judging committee assessed the strengths and weaknesses of each plan. Blair was responsible for listing CIB in the London Stock Exchange when it first got introduced to the Egyptian market. He mentioned that “the CIB/AUC competition was beneficial for the competing teams, as it was a great marrying of theories which they have learned, their own knowledge and their research on CIB and the banking sector to create ideas to benefit CIB in the long term.” He greatly enjoyed seeing the teams' reasoning and rationale for their ideas in their presentations.

The competition started with the registration of teams and an online Q&A session over Zoom where they were given a chance to ask the CIB team whatever they wanted. Then they worked on their presentations and presented them on the finals day.

Ultimately the competition ended with announcing the winning teams, with “Banking Reimagined” taking first place and “AUC Finance Team” going in second, and “Calibers in Banker’s Battlefield” ranking third. “Banking Reimagined” members were ecstatic about their victory with Omar Sallam, graduating senior student majoring in both finance and petroleum engineering, being thankful for the chance that both the Career Center and CIB gave them to tap into their potential, elaborating that his team focused on methods to assist CIB clients with their financial transactions in a COVID-19 world. A fellow member Marina Morcos, a junior student majoring in finance, explained, “CIB’s competition will always remain my first competition ever to win first place, but most importantly, it was the experience that stood out, especially the opportunity to work harmoniously together as a team exploring the future of banking.” Despite the complications of the Corona era, the competition succeeded in delivering its main message: we can achieve great things when we work together towards a brighter future.