Becoming the Next CEO of P&G 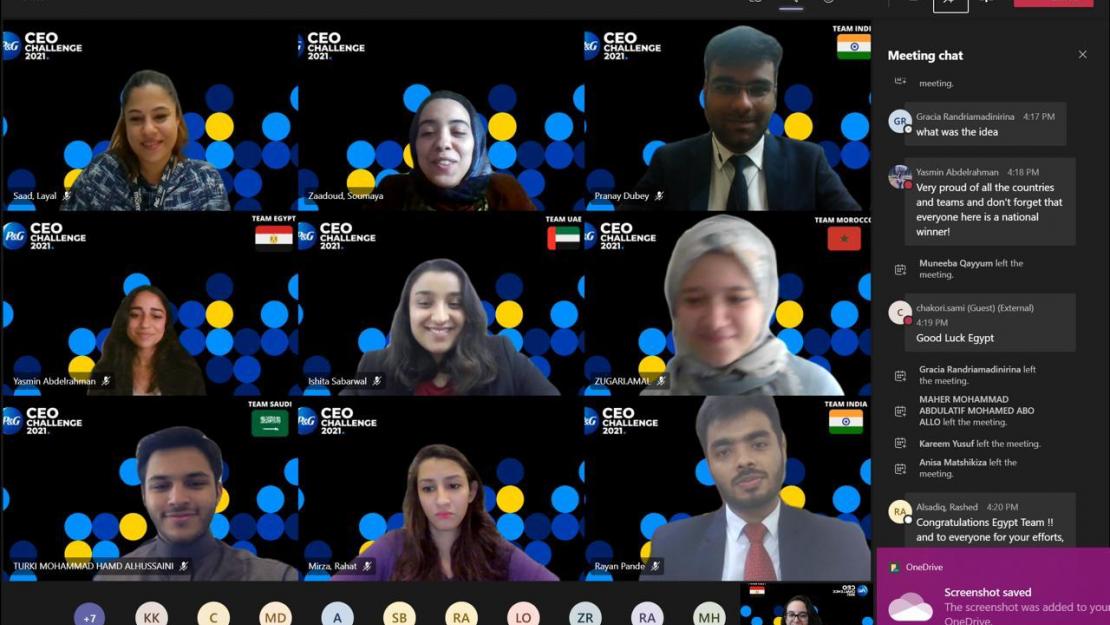 Every year, the P&G CEO challenge sets out to see who is most fit to be the next CEO of P&G. The competition hosts teams from all over the world and top students ascend to the global final, winning an opportunity to meet P&G CEO, David Taylor.

Making AUC proud, Yasmin Tarek might just be part of that team. Last week, Tarek, alongside her teammates Nourhan Nada and Sabrina Eshra moved a step closer to meeting David Taylor, winning the competition’s national round in Egypt then the IMEA regional round shortly after. The team’s accomplishment was no easy task and could never be referred to as a lucky moment. They competed against around 400 teams from so many universities in Egypt, India, Pakistan, Morocco, Saudi Arabia, UAE, Nigeria and South Africa, proving that students at AUC can compete globally in difficult challenges and achieve great things. Tarek is a junior student majoring in business administration and is also part of the Career Center’s Peer Career Leader program (PCL). She describes her journey with her team as an incredible learning experience and something she wouldn’t have thought of doing if it wasn’t for the Career Center and the PCL.

Tarek, Nada and Eshra have been friends for quite a while. When they received an email from the Career Center announcing the competition in November 2020, they discussed the potential of joining the competition as a team of three. Initially, they were hesitant because it was midterm season, but then they decided to check out more details about the challenge online. They decided to go for it and try to do their best to manage their time between their course loads and the competition requirements.

The first phase of the challenge took place in December where the team had to solve a case study about P&G in two hours. The case was about Oral B, a P&G brand. The objective was for the team to analyze the case and all its components such as financial statements, market, industry, etc. and then come up with an innovative sustainable idea for the company to implement. The team came up with the idea in three sentences and it was enough for them to move to the next level of the competition. The next phase was a video submission which they had only two days to prepare for and submit. It was about the case study they had solved and the objective was to briefly explain their analysis and introduce their idea and solution, which they also successfully passed.

Talking about the people behind the competition, the team only had great things to say. “The people were so helpful; we were constantly showered with emails from P&G IMEA region describing what we needed to do for each phase as well as steps and guidelines,” Tarek says. The team also received sessions on how to prepare for the final regional presentation and had a mentor from the region with whom they had a meeting to show the presentation and received feedback and tips on the Q&A part.

Tarek credits the experience to her personal and professional development as part of her journey at AUC. “I learnt how to work in a very high-stress environment because everything was time-limited, while still being creative with the idea and the delivery of our solution.” She also gives massive credit to the PCL team for their continuous support throughout the competition. “Without the PCL, I wouldn’t have even known about the competition in the first place. Not only that, they never stopped encouraging me and my team, most of the support we received was from them.” Tarek explains.

Tarek continues to feel an increased sense of responsibility because she wants to make her fellow PCLs proud and she doesn’t want to let them down after all the support and love she and her team have received. The team explains that they felt so honored when the Career Center posted about their achievement on their page and can’t wait to work hard to reach even more success in the competition.